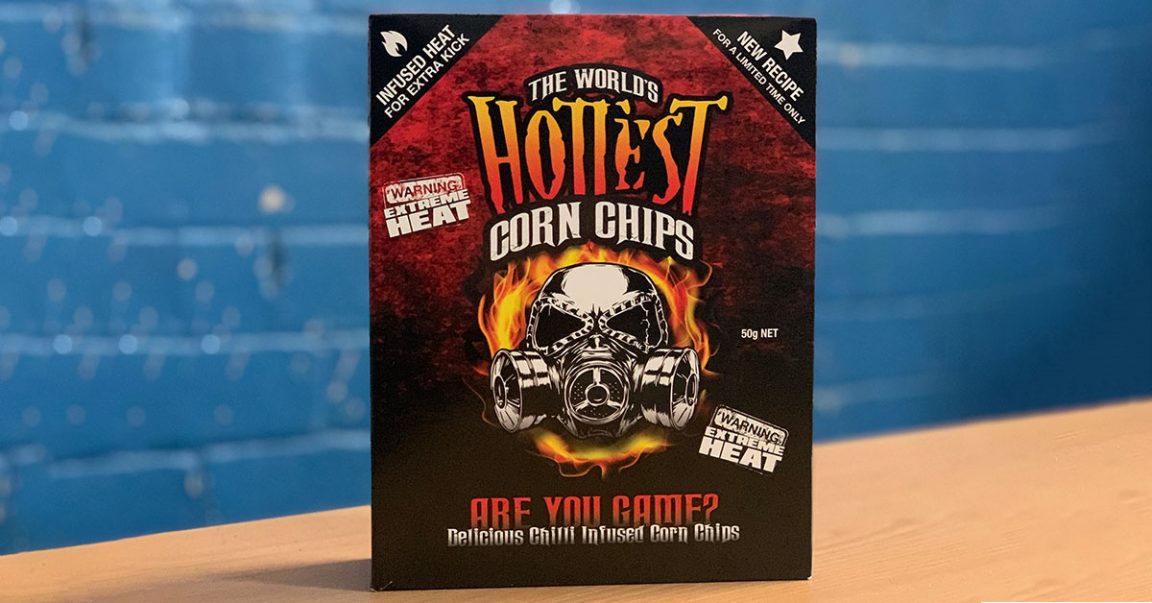 This year, we’ve been working with Bibina at Warners Bay to share a stack of great recipes with you that we’ve had a lot of fun with.

For the uninitiated, Bibina has become the one-stop-shop for Newcastle foodies. If you’re looking for gluten-free coeliac foods, bread-making supplies, organic foods, or imported groceries Bibina has you covered. The massive warehouse, which has been owned and operated for over 30 years, is like a food lovers playground and has to be seen to be believed.

A few weeks ago, they sent us a package of some of the most interesting stuff you can find on their shelves including these bad boys…

If you like it hot, you’re going to love these ones. But if you’re a chilli novice, hold onto your hat!

These things are the REAL deal and come with warnings for people who have cardiac conditions for a good reason. The Chilli Seed Bank chips are made with triple pressed, A-grade Carolina Reapers, Scorpion, and Bhut Jolokia puree, and are finished with a dusting of Carolina Reaper powder. And let us tell you from experience – you’re gonna be reaching for the milk!

The next thing we pulled out of the box were these moorish little numbers.

Crostoli is a popular Carnevale treat that you’ll find throughout Italy. They’re ribbons of deep-fried dough dusted with icing sugar and often drizzled with melted chocolate. The ones that you’ll find at Bibina are made by a company called Crostoli King come with melted Cadbury’s chocolate on top. YUM!

Be very careful when you open a bag of this popcorn. Because once you start eating you’ll find it VERY hard to stop.

One of the best things about these is the guilt-free snacking. They’re baked with extra virgin olive oil and use no preservatives, MSG or artificial colours… Plus they’re gluten-free which make them a perfect snack for people who live with Coeliac disease.

Hold the phone and head straight to Bibina to pick up a box of these.

These amazing little packages of joy are apparently a famous Polish treat. And while we’d never heard of them until we opened our box of goodies, they were the first thing to go, with everyone around the office just absolutely frothing on their deliciousness. It’s a whole pitted cherry dipped in cherry liquor and wrapped in a shell of this decadent bittersweet chocolate.

Get all the smells of your childhood without the need for a trip to the dentist.

The last thing in our box of goodies is not meant for eating, even though it smells good enough to consume. And they really do smell like the real deal. Everyone who came into the room when we had our burning asked who was eating Chupa Chups.