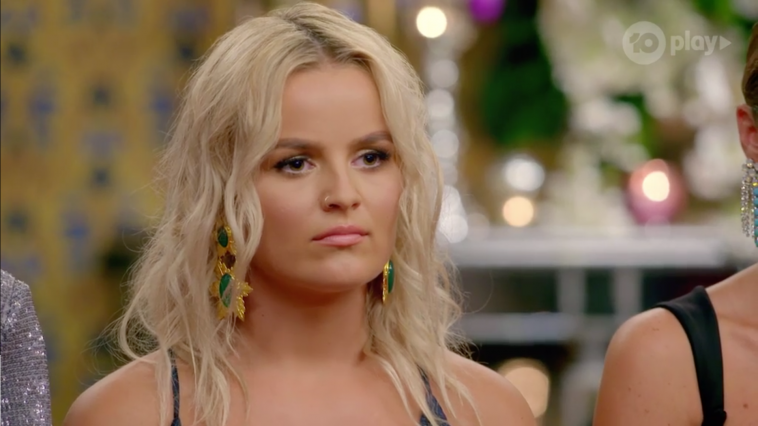 Welcome to our recap of last week’s The Bachelor.

This episode opens with a group date. A sexologist has shown up and wants to help Matt and the girls explore their chemistry. Abbie can barely contain her excitement because she wants to be a sexologist.

Of course you do, Abbie.

Matt will be blindfolded, and each girl will hug him for 40 seconds. Why 40
seconds? To release oxytocin.

Next up, Matt and each girl must stare into each other’s eyes for four minutes. Our Elly wins again and they’re off on a single date.

During this date, Elly speaks up about her concerns about Abbie. Again. Although I agree with her motives, I cringe because this won’t go down well.
And I’m right because Matt gets pissed off. He wanted a romantic date, not to hear
her bitch about Abbie.

Uh oh. For the first time, I seriously worry Our Elly has made a big mistake.
The next day, Matt whisks Abbie away to play house.

They’re going to pretend to move in together. Naturally, the date ends up with this pair horizontal on ‘their’ bed, making out. Matt’s penis is delirious but Matt’s brain pulls them both away from Abbie.

“I know I need to slow things down’ Matt tells us. Ya think?

Later in the date, he discusses his concerns with Abbie. Abbie looks dejected, on the verge of tears. Have I possibly misread her?

Yeah, nah. When she replies the others are just jealous, it’s such a classic response,
I’m convinced she’s used to dealing with this and has the sad eyes ready to go.

Her interviews to camera show an entirely different Abbie. A nasty, mean girl who sneers and crows with triumph when she manages to fool Matt. Again.
At the cocktail party, Our Elly is worried and seeks Abbie out to chat. Abbie shuts her down. Words must remain unsaid.

Then the unthinkable happens. Our Elly is sent home. She’s stunned, I’m stunned, we’re all stunned.

I have officially lost all interest in this farce, but the show must go on.

Next up we have Hometown dates with the final four girls and we all know that something very.dramatic happens tonight with Helena. But first, Matt visits Abbie in Brisbane.

She takes him to a rooftop pool where she tried to sound impressive but when Matt asks her a simple question about the Brisbane skyline, she has not a single clue what to say.

I laugh and laugh.

Matt meets Abbie’s family. Mum, sister and BFF seem lovely, but Uncle Rob is a bit of a dick. But Matt smiles and makes it through the meal. Abbie tells Matt she’s falling in love with him.

I have officially lost all interest in this farce, but the show must go on.

Next up we have Chelsie in Melbourne. Since the sad demise our Our Elly, Chelsie
is now Our Chelsie.
Their natural ease with each other, their chemistry remains intact. The seem like a couple who’ve been together for years. Chelsie’s sister Shannon asks Matt what
makes you worthy of my sister?

Dinner is uneventful and Our Chelsie wants to tell Matt how she’s feeling but she just can’t do it. We get it, but she needs to say something.

Matt meets Emma in her adopted hometown of Sydney. She doesn’t have family here so close friends fill in. Emma’s friends want Matt to say he’s in love with her. Matt says he’s aware of how Emma feels but he’s not quite there yet.

Then it’s off to Perth with Helena. Matt grew up in Perth so he’s keen to return.
Helena decides they should play tennis. Matt says he sucks at tennis and Helena
admits she hasn’t played since she was 12.

Ummm okay. They decide to sit in their tennis whites and drink.

At dinner, Matt forgot Helena spoke French and Helens freaks out, muttering about red flags and 100% egged on by her sister. Matt is stunned and Helena decides she can’t do this.

The Bachelor gets dumped!

Matt wanders the streets aimlessly with producers and cameras in tow, Helena keeps apologising. Matt wants to talk to her. She says she will give it another go.
Matt’s relieved. Then she says she won’t again.

It’s like a telenovela. Lots of angst, wringing of hands and broken promises.
I cannot turn away!

I wonder if Matt’s even considering the future with this woman. If she is THIS
dramatic over him forgetting one simple thing. WTF would a future life be like with her?

Cut to the rose ceremony and we are left wondering if Helena will even show up.
She does and pulls Matt asides. The other girls are furious! And I get it.
Tonight, it’s Emma’s turn to go home. It’s not surprising and Matt has made another silly mistake.

For a super smart man, Matt sure is stupid.