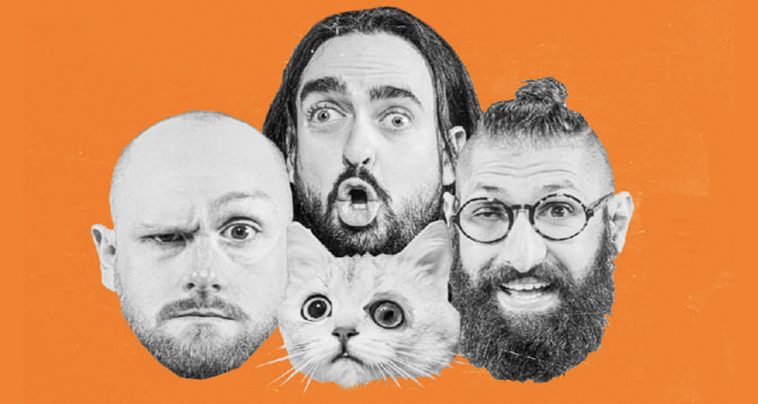 Hot on the heels of the runaway success of their 2020 Netflix series Big Ol’ House Of Fun, comedy trio Aunty Donna are headed to Newcastle.

The tour will be Aunty Donna’s (aka Mark Samual Bonanno, Broden Kelly, and Zachary Ruane) first live theatre run in three years and they said while initially hesitant about going on the road again, their deceased feline companion made an offer too good to refuse.

“When the Magical Dead Cat demanded we participate in this incredible tour of Australia, a tour showcasing brand new hilarious comedy and some fan favourite bits from our recent world-shaking Netflix series, we were initially hesitant. It seemed we would provide the bulk of the entertainment whilst the Magical Dead Cat would merely bring some coughed up fur balls,” they said in a statement.

“We raised our concerns with the Magical Dead Cat and it offered to sweeten the deal by ending each show with a special surprise web-slinging guest whose name rhymes with Glider Man. Desperate to meet this special surprise guest, we immediately said yes.”

Aunty Donna exploded onto the Melbourne comedy scene in 2012 with their unique brand of surreal, fast paced, alternative sketches.

Since then, their loud and energetic shows have toured around the globe multiple times, won an accolade of awards and amassed a worldwide fanbase including more than 453,000 subscribers and 84 million views on YouTube.

The upcoming run, which kicks off in Brisbane in October has seen more button mashing than a Hungry Hungry Hippos tournament with shows selling out all over the shop, so you can rest assured that tix for the Newcastle gig will sell like some kind of warmed-up cakes.

Also on Newcastle Live
Want some free tunes? Better get the jab!
Family at the forefront of Very Popular Theatre Company production
Seth Sentry is bringing his Super Cool Treehouse to Newcastle!
Flaunt your fried chicken love with these jazzy jumpers!