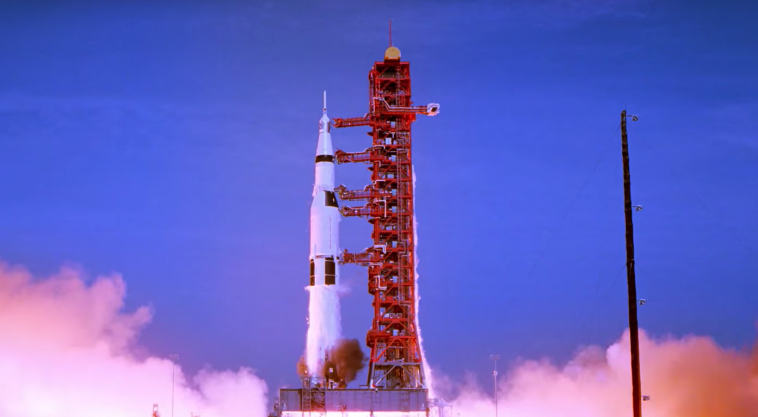 Today marks the 50th anniversary of the day mankind set foot on the surface of the moon. It was, as noted by this timely documentary’s film notes, the last moment the world was truly one.

It was also the culmination of an ambitious promise made by the young American president John F Kennedy in response to the USSR launching Sputnik 1, the first artificial Earth satellite, in October 1957.

JFK’s now famous, We choose to go to the Moon speech was a rallying cry to encourage the American public to get behind the new Apollo missions, the ultimate goal being to land a man on the moon. And get behind it they did.

(Of course, they eventually lost interest until the near-tragic events of Apollo 13 but, that’s another article entirely.)

That goal was finally realised on July 20, 1969 when Neil Armstrong stepped onto the surface of the moon. Watched by a global audience of some 650 million people, the unassuming Armstrong spoke arguably the most famous words in history:

‘that’s one small step for (a) man, one giant leap for mankind’

It must be noted that Armstrong has always insisted he did, in fact, say a man, it was simply misheard. Then again, Armstrong said for a long time he came up with his words as he descended the ladder to the moon so ….

Seriously, as if NASA was ever going to let these historical words be left to a moment of spontaneity and feelings. Like many things to do with the Apollo project, many questions remain either shrouded in secrecy or left unanswered.

I guess we may never know.

But I guess I should climb out of my NASA/Apollo missions rabbit hole and talk about this stunning documentary.

And, if you’re a documentary fan or space nerd, stunning doesn’t even begin to describe what you will see. Using newly discovered and never-before-seen 65mm film footage that, while not shedding new light on the event itself, does give us more insight into what was going on behind the scenes, in the weeks, day and hours before the mission launch.

Told from the perspectives of the astronauts, the mission control team and even the millions of spectators who gathered to watch this historic event, we are taken back to a time when the world was left awed by what they were witnessing.

There is no other word than breathtaking to describe what you will see.

If you are near an IMAX that is screening this film, go and see it there. Spend the dollars because this is exactly the kind of film that IMAX was built for.

If you are really into the space stuff, check out my review of First Man, the biopic about Neil Armstrong. Released in cinemas last year, you can catch it these days on Foxtel. Foxtel is also running loads of moon landing doco’s, of course, so you can watch all about the Apollo missions until your eyes fall out.