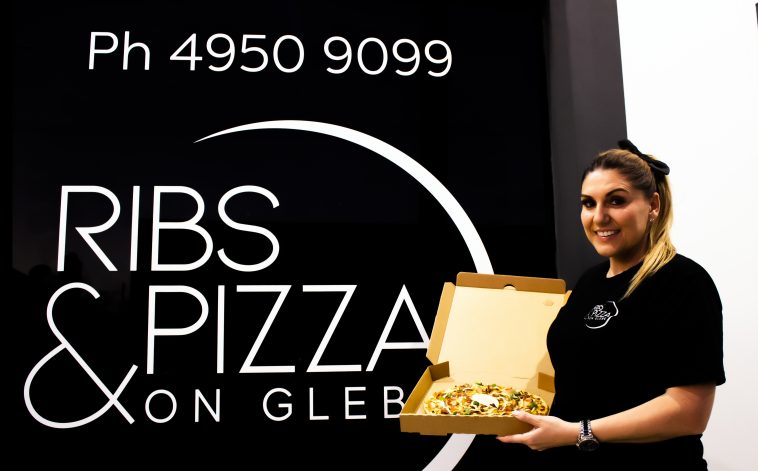 Deanna Zulumovski loved Adamstown-based eatery Adam’s Ribs and Pizza so much, she took over the business.

When news broke in November last year that the popular American-style diner was shutting its doors, Newcastle was left crestfallen, including Deanna and partner Ryan Polson.

“We had been customers for quite some time,” Deanna told Newcastle Live

“We were massive fans of the food and when we heard that Adam’s was closing we thought It’s just too good to let go.”

Rebranding to Ribs & Pizza on Glebe, Deanna and Ryan are still pumping out those delicious pizzas and mouthwatering ribs (with a few tempting additions), with former owners Mark and Annette imparting their super-secret recipes before their departure.

All of the staff were retained, too and Deanna said that this new venture would not have been possible without such a switched-on team.

“I really couldn’t have done it without them. They have been absolutely brilliant,” she said.

While the name may have changed, the mission remains the same – to satisfy Novocastrian diners with some of the juiciest, most succulent ribs (pork, beef, lamb and even lamb shoulder) to ever grace a plate, and an eclectic range of pizzas that range from the traditional to the unique.

In fact Ribs and Pizza on Glebe is home to the famous Hot Chip pizza (garlic aoli, roasted chicken, potato fries, bacon and mozzarella and topped with a swirl of tomato sauce and shallots)

For Deanna the secret to such delicious fare was to never cut corners.

“With all of our pizzas, ribs and sauces, everything is homemade, fresh daily. We’re all about good quality food,” she said.

“All of our pizzas are low fat. The majority, except for the Carne’vour Deluxe, are less than 10 per cent fat and with the ribs, we put a lot of time into them to make sure they are soft, succulent and juicy.”

While the ribs and pizza are the main events here, there are plenty of other gems to unearth on this substantial menu including pasta, and an array of sides including waffle fries, mac and cheese, wings, pork belly bites, and BBQ Burnt Ends – smoked beef brisket tossed in house-made honey BBQ sauce.

Currently open for take-away, work is almost complete on a new-look dining room with sit-down service expected to kick off from Friday 19 February.

So, given that they came into this business as fans first, just what are Deanna and Ryan’s must-have menu items?

“Our go-to was always a Carne’vour Deluxe, and a rack of pork ribs with Makers Mark Bourbon Hickory sauce and an American soda,” she said.

Ribs and Pizza on Glebe is located at 548 Glebe Road, Adamstown and is open Wednesday to Sunday from 4pm to 8.30pm.

Head here for more information and a full menu.