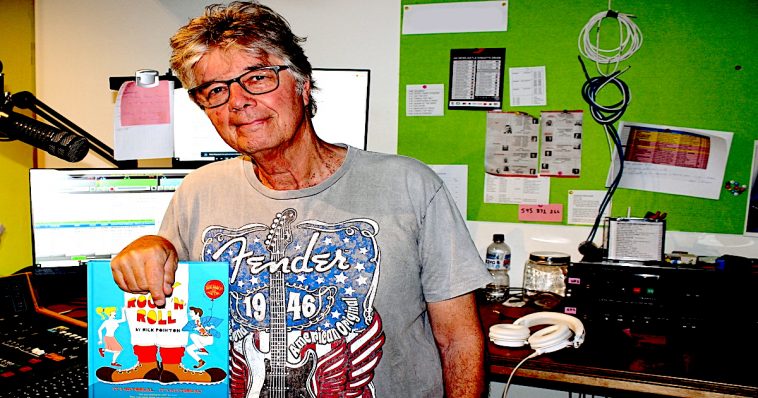 Rick Pointon has more than a few stories to tell. Not surprising given that, since playing his first gig back in 1963, he has shared stages with some of the biggest hitters in the music biz – everyone from Johnny O’Keefe and The Easybeats to The Bee Gees to John Farnham.

Plying his considerable talent to a raft of Newcastle-bred bands including The Second Thoughts, The Tremors, and the now legendary Benny and The Jets, there are few more qualified to hold the title of Newcastle Rock Royalty than Rick.

Now, he has turned his attention to the written word releasing Hey Rock ‘n’ Roll, an autobiographical love letter to the Australian music scenes of the 1960s and ’70s, with particular deference, of course, to Newcastle.

A definite labour of love, Hey Rock ‘n’ Roll is a passionately produced tome that charts not only Rick’s career but also the ‘groovy’ Newcastle of the 1960s and subsequent decades.

Speaking to Newcastle Live, Rick said the inspiration behind the book was to pay homage to that very special time in Newcastle music culture and the people who made the scene what it eventually became.

“It’s certainly been a couple of years, maybe two and a half but it hasn’t been all I’ve done, there have been stoppages along the way and then COVID came and that held things up a bit,” he said.

Aside from being chock full of vivid and often hilarious tales (thanks in no small part to Rick’s laconic turn of phrase), Hey Rock ‘n’ Roll is also replete with a cornucopia of photographs and ephemera from the time that really helps put the reader smack bang in the middle of the swinging sixties.

“My wife calls me a hoarder, but it has been really handy to have all those little bits and pieces – it definitely makes it more interesting.”

Ask Rick to explain the mood of the town during these periods, and it becomes obvious that this is a man brimming with passion and love for the era.

“It was exciting all the time,” he recalled.

“I can remember thinking London in the ’60s and ’70s must’ve been unbelievable but Newcastle was great also. There were so many bands and so many venues – if one closed another would open. You never thought you’d be unable to get a gig for the band.

“There were heaps of bands but the camaraderie was excellent. It was a really close-knit community and a lot of those guys are still in touch today.”

While there’s no denying that Rick has played more gigs than the majority of us have had hot dinners (including his outfit The Second Thoughts backing the Bee Gees when they headlined the 1966 Matara Festival), he said that easily the strangest (recounted in the book) was when Benny and the Jets played the Arts School Ball at Tighes Hill Tech in October 1977 with Aussie punk pioneers Radio Birdman.

“That was about our strangest gig ever – it was probably the weirdest gig I’ve ever done,” he said.

“We were booked for it for ages and, a few days before, the woman rang up and said ‘everything’s cool, but this gig is in conjunction with the Uni of Sydney and they want to bring up a band,’ and I thought ‘here we go.’

“Then you’ve got Australia’s first rock and roll revival band playing Happy Days and you’ve got Radio Birdman playing Descent Into The Maelstrom at a million decibels. It was horrendous.”

Adding that the Sydney outfit brought a retinue of fans (two double-decker busloads) to the gig, Rick said it quickly descended into something akin to Jake and Elwood Blues dodging beer bottles behind chicken wire.

“It was a nightmare, but great to live through.”

While he might be a loud and proud child of the ’60s, don’t go thinking that Rick is stuck in some sort of time capsule.

A voracious record collector, Rick admitted that he was constantly on the lookout for sweet sounds, regardless of the decade in which they were produced.

“These days I like stuff like George Ezra, Jake Bugg, Radiohead, Elbow and London Grammar – there’s a lot of good stuff around these days, you’ve just got to go out and look for it.”

Hey Rock ‘N Roll by Rick Pointon is out now. Head here to find out where you can grab a copy. Rick will also be discussing the book at Lake Macquarie Performing Arts Centre on Wednesday 10 March. Head here to register for the free event.