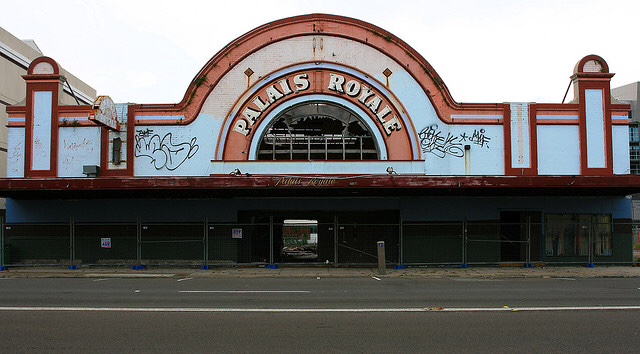 Newcastle was once famous for its thriving night life and especially its live music scene. Though things are very different now, here’s 5 venues we wish were still here…

In the halcyon days of Newcastle night life there were literally 22 live gigs in Hunter Street alone from The Cambridge in the west end to The Great Northern in the east.

Sadly, things have changed and not necessarily for the better. The centre of our city is more akin to a retirement village some nights, and the once flourishing night-time economy is no longer the powerhouse it used to be. For the state’s 2nd biggest city, this is tragic.

There are some great memories though, and here are five of the legendary venues that formed so much of Newcastle’s character…

With a name like this, Fanny’s was always destined to be one of the notorious highlights of a night out in Newcastle. Sexy bar staff (both genders), lots of cozy little alcoves to settle in and a fantastic stage, sound system and dance floor – the nights where excess was just a matter of course. The best local acts were really able to strut their stuff on the big stage and the crowd responded as one. And, of course, the catwalk bikini babes and muscle men competitions were unmissable. Ah, the celebration of youth.

The venue was at its peak during the late 80’s and early 90’s under the ownership of Rolly de With who, apart from supporting the local music scene, made sure the place had a sense of style – let’s face it, with a name like Fanny’s, it would have been easy to become the sordid underside of Newcastle’s night life. But, during this period, Rolly created a place that had some glamour attached to the party.

If Fanny’s was the destination for decadence in the 90’s, the JR was the den of debauchery. What a venue – you never felt judged or out of place at the Jolly Roger. In the words of the immortal Victor, the JR’s infamous manager, the venue was Newcastle’s number bloody one nightspot, number one venue – the stuttering radio ads echo even now – n-n-n-number one venue! The JR was home to the masses seeking a great time without the glitz or pretension.

As you walked in the door flanked by mountainous bouncers, sometimes paying at the little window, you headed up the stairs, making a left-hand u-turn at the top to enter the first room or a right turn into the restaurant. Amazing meals for ridiculously low prices. The main room had a low ceiling and as you looked to the stage at the far end, a haze of smoke hung overhead and the carpet stuck to foot underneath. To the left was Big G the DJ, and to the right the bar lined the wall. Many of the local musos hung out at the JR, renowned for the Snape Brothers’ residency every Thursday night. With the musos came the ladies – it was a feast of the scantily clad and very friendly. It would be true to say that what was seen at the JR, cannot be unseen…

For a venue of such grandeur, it was sad to see what it became in its later years. Opening in 1929 and once a destination for dance bands and throngs of jivin’ folk in Newcastle’s early days, The Palais’ arrival in Newcastle was a sign of the city growing up, becoming a beacon for those wanting to socialise and enjoy live music. There were jazz bands, dance bands and people from all walks of life. Inside, there was an ornate ceiling held up by intricately carved columns. It was truly a masterpiece.

The venue hosted some of the biggest names in music including one memorable night when Crowded House forgot the song they were playing, in the process cracking themselves up – the crowd laughed too and the band simply started the song again. Unfortunately, the 1989 earthquake and then the 2007 Pasha Bulker storm brought this grand old lady to her dilapidated end. An icon sadly missed.

Now, this was a great pub for music. By the time the 70’s and 80’s rolled around, this venue was the spot to see some of the bands that were musically brilliant but without the commercial edge of the cover bands. Acts like The Slots, featuring a young and brilliant Nick Raschke on guitar, and the almighty Witchdoctors were regulars at The Family. The Witchdoctors featured the talented Bailie brothers and singer Choc Erriwatta and they were a musical force loved by many.

The Family wasn’t a flash pub, offering patrons an outdated dining room and furniture to match but we loved it just the same. It used to get so packed that the windows fogged up with condensation and, on some nights, you could see the smoke billowing out the doors. But it was an essential part of the Newcastle social experience and, again, one we sorely miss. Later some clever individual thought it would be a hoot to call it ‘The Duck’s Nuts’ – good grief, it was never the same again.

You might remember this venue as the Federal Hotel, or maybe the Hunter On Hunter, or perhaps you just avoided it altogether due to its rough reputation as a bikie pub. Unlike the above, this venue’s glory days did not fall in the late 80s/early 90s. It was circa 2007-2008 when this venue sizzled under the new moniker of The Civic Hotel. Although The Civic’s golden era was relatively short-lived, it was certainly much-loved.

The Civic offered an alternative scene to the grungy Cambridge Hotel, the all-night party at King Street Hotel, or the sleazy Fanny’s (far removed from the 1990’s description above). This pokey little L-shaped venue was home to what you could call the trendy, alternative, or “hipster” crowd (before hipster was hipster). The small dance-floor was championed by some great Newcastle DJs (the legendary Kato, now Sydney-based, could always be found behind the decks) and live bands on the odd occasion. If you weren’t keen to hit the d-floor, you could chill out and chat up babes in the pokie room. Or, cram onto the smoking patio out the front and find your square inch of space to light up.

Just as it’s popularity was waning in favour of the CBD Hotel, a fire ripped through the Civic in 2009, becoming a very literal example of “it’s better to burn out, than to fade away…”

These are just a few of the colourful and quirky venues that gave Novocastrians some of their best nights out, and now we want to know your favourites! Let us know in the comments below…